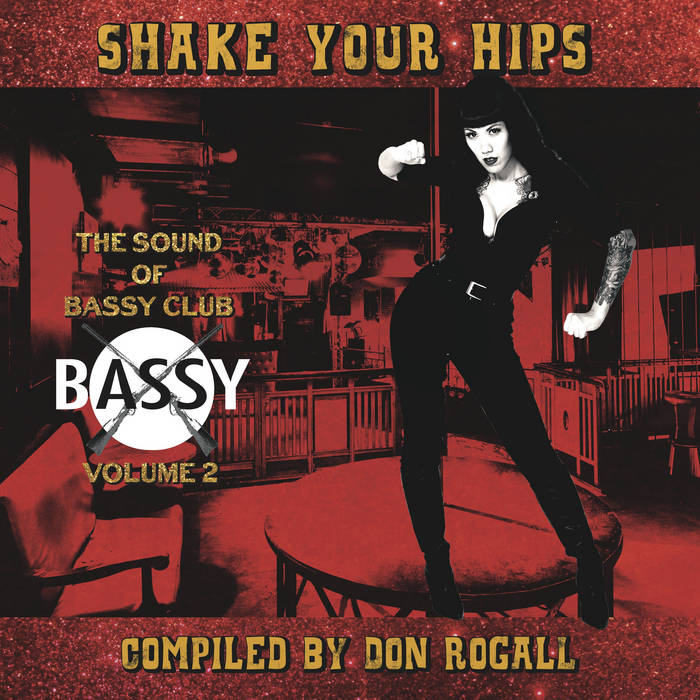 The Bassy Club, Berlin. One big bow to the music and
lifestyle of the 50s and 60s. A Mecca, a Gaulish village,
and a never ending source of good music. The birthplace
of several vintage-trends of the last 15 years in Berlin.
The DJs popularized many of the tunes that were mostly
forgotten or unavailable and eventually got re-issued.

Therefore, making an own compilation is a good and obvious idea. Best with songs that already gained success
at the Bassy for years and with unavailable songs.
Resident DJ Don Rogall opened his casket of specially remasterd and restored versions to put together this
„one of a kind“ compilation.

For the cover art work, Lou On The Rocks – one dancer of the „Hoochie Koo“ nights, payed her homage to Tura Satana. A perfect match.

This fine compilation starts with the charming, exotic and (mostly) forgotten Bermuda, performed by Ray Sharpe, produced by Lee Hazlewood. A song you might choose for your trip to the island.
Enough introduction, let´s hit the floor and Mellow Down Easy with this nice cover of one of the greatest juke joint dancers written by Willie Dixon. Achtung! Even if you already know the version of Ric Cartey, give it a listen – this one has more drive and is great for dancing. Like most of the versions on this compilation, it differs from the released material – same goes for the title track Shake Your Hips: This alternate mix of an already-hit will rock your socks off, word.

That´s It Man is what you might say already. The Valentines are shouting it out loud, irresistible and in a boogie fashion - like no other. The tempo is high, so let´s add some rock a billy to the mix. I Chickened Out is a fun little tune with an irresistible, boppy beat. (But again, only in this version). But let´s not get stuck in one style – variety is the spice....

The only tune from Europe, more precisely from Bulgaria, is by Lea Ivanova singing Adriano Celentanos Basta Con La Luna. And this – Ladies and Gents - is a real gem! ...and in a
way exotic, too.

Next, Daddy Lolo is a true classic of exotica. Rogall played the single for decades – until he found this original instrumental take of Charles Gaminian himself. This is the one, but with overdubbed vocals by Saudia Young, who performed this in a soundsystem style at the great Hoochie Koo nights at the Bassy Club.

Side B kicks off with an the „signature tune“ of Don. John Lee Hooker is one of his biggest influences and there ain´t no DJ set without a song of the man. Here under the quite obvious alias „Booker“. Needless to say this is exclusive, only on this Vinyl.
Another big thing at Bassy is the sound from New Orleans. This is represented on this record by Tommy Ridgeley, a local master of the genre, with his Double Eyed Whammy, in an uptempo version - very danceable! Same goes for the Robins Turkey Hop, conducted by Johnny Otis – a hero of the genre – just like Buddy Johnson who directed the orchestra for his sister Ella Johnson in this tough but smooth version of No More Love.What a girl!
Her younger sister might have been the one the Coasters were singing about in Young Blood. They express their admiration for the girl. Today one would call it stalking or worse.... well, at least they didn´t kidnap her, but then they might have heard Jewel with his Rubies singing his message to
the Kidnapper, or even the final song, one of Guy Mitchell: 99 Years, Dead Or Alive - both late nite strollers at the Bassy Club.

Bandcamp Daily  your guide to the world of Bandcamp

Featuring appearances from Kari Faux, Bluestaeb and and interview with NY-bred artist Wiki